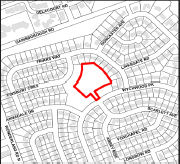 If you have concerns during the construction, there are two contacts.

The city is still set to construct the park this fall. This will depend on a few factors including the weather. The actual start date will be up to the City’s contractor, but the City will provide an update when start up nears. The first action on site will be removal of some trees in poor health. (The developer will be removing some trees as well on the part of the site that will be used for housing).

Park amenities will include a playground, open green space, large ‘park’ trees, a pollinator garden, seating areas, and pathway connections to the sidewalks. With the emphasis the City heard for trees, part of the plan includes making arrangements for larger caliper trees than would typically be planted in neighbourhood parks. The playground also will have more features than is typical for Neighbourhood Parks, including a play structure with multiple slides, and a separate area with two bays of swings (four total; one designed for toddlers, one that is accessible, and two standard size ones). The playground equipment is tentatively set for October installation.

If you have questions, the contact for this project from the City is listed below. She welcomes your questions.
Stephanie Wilson
P: 519.661.CITY (2489) x 1871 | stwilson@london.ca